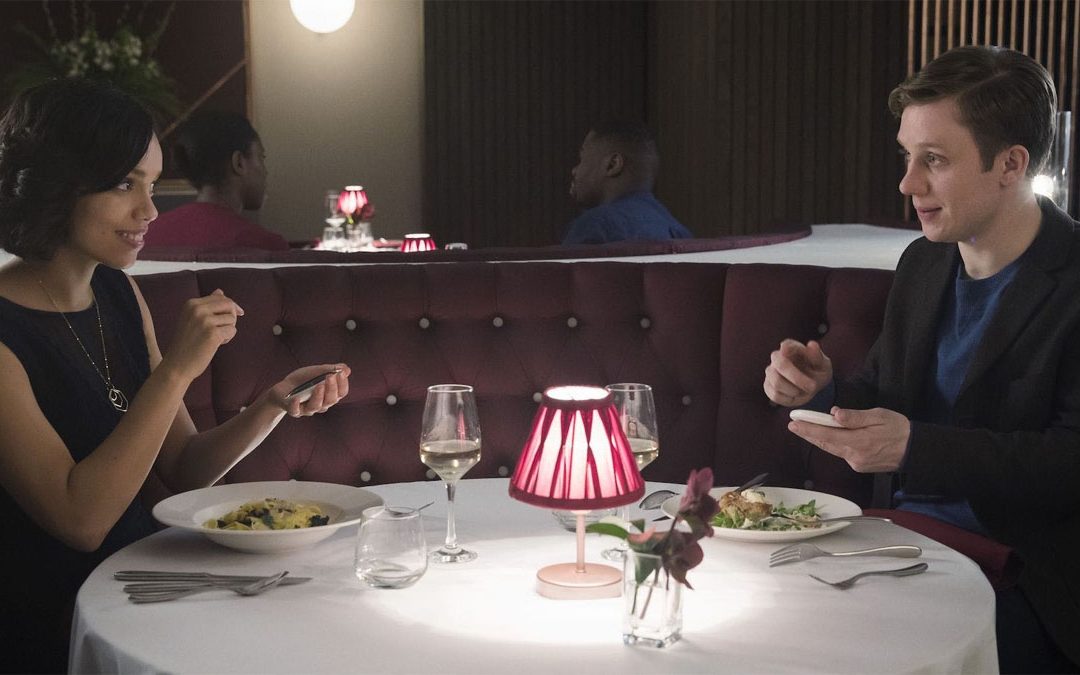 Black Mirror takes on the world of dating apps in Hang The DJ. Spoilers ahead in our review…

However merry a path a Black Mirror episode seems to be wending, its audience has been taught to brace for impact. Show us a fragrant young couple hitting it off and we dutifully await the revelation that we’re really watching a suicide pact/eternal torture session/poignant vision of the afterlife reminding us that we, our loved ones and our hopes and dreams are slowly dying too.

Not here. With its menacing taser-armed guards and talk of feeling “like a prisoner”, Hang The DJ hints towards a dark secret, but in fact is all rather sweet. True, the Frank and Amy simulations aren’t always having the best time, but at worst they’re only trapped in a Center Parcs with someone who gets on their nerves. That’s a yearly occurrence for many of us. (And theirs is a pretty upscale Center Parcs entirely free of screaming kids, so basically, paradise.)

Hang The DJ develops into a stronger story than it starts out. A dating app that pre-selects your partner and the length of your relationship is an amusing idea that raises the question of how people might behave with just such a countdown. The fun though, of that ‘what if?’ scenario soon runs out of steam. The mystery of this strange set-up where people don’t seem to have jobs or lives or any responsibilities other than coupling up is one of only mild intrigue.

Great news then, that two things are done to shake it all up. Firstly, Amy and Frank decide to rebel against the system and live in blissful ignorance of their predestined expiry date. Secondly, the twist comes that they’re just one of a thousand simulations testing out compatibility for their real-world counterparts. It’s very neat and cleverly seeded. Amy’s developing curiosity about their world’s unvarying patterns—stones skim across water exactly four times every time, she has the sense she’s watching herself play out a repeated routine—pays off well.

The simplicity of the environment, with its neat numbered lodges, cute driverless cars and imposing blank wall, all make sense as a virtual world. The exteriors all look naïve, like a child’s drawing. Inside, director Tim Van Patten (The Sopranos, Boardwalk Empire) and the design team convey a kind of stylish emptiness, as if the whole thing’s been reproduced from the pages of a high-end lifestyle magazine. Chic, but devoid of the actual stuff of life – there’s no mess, for instance, anywhere.

The backdrop to the Pairing Day, a tasteful lakeside ruin, is styled as a well-heeled wedding venue. That all fits with the episode’s satirical take on the world of dating, which is depicted as endless legwork in which you’re either paired with someone who’s a good shag but annoys the hell out of you, or with someone you grow to utterly resent by the time you part ways, all en route to the reward of your “ultimate compatible other”, aka The One.

The episode has some impressive and poetic visual moments too. Amy and Frank climbing the endless ladder is a romantic and memorable image, like something out of French symbolism, while the Wii Plaza-style plane where all the simulations go before being absorbed into the final read-out feels pleasingly sci-fi. Undoubtedly, season four is Black Mirror‘s best looking run yet.

What really sells this episode is the chemistry between two very likeable and charismatic leads, Georgina Campbell (Broadchurch, Murdered By My Boyfriend) and Joe Cole (Peaky Blinders, Skins) are easy to root for. Campbell’s performance as Amy especially is naturalistic and endearing.

Hang The DJ starts off as The Lobster, turns into The Good Place, and ends up as When Harry Met Sally. (After going through all the hassle of dating, the couple who met right at the start end up together, and they’re a near-perfect match).

The ending, which zooms out of the app and into the real world, is hopeful and sweet—two descriptions that would never have been associated with Black Mirror until San Junipero came along. That ground-breaking episode expanded the definition of what this show can do. Horror and nihilism may be its bread and butter, but this proves there’s plenty of room for clever rom-com too.